Blepharitis is an inflammation of the eyelids can cause chronic eye irritation, tearing, foreign body sensation and crusty debris. Blepharitis comes in two forms: 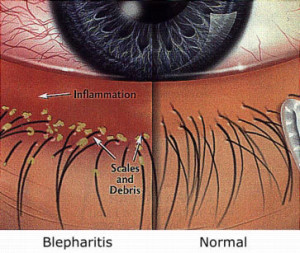 It’s common to have a mixture of both anterior and posterior forms of blepharitis at the same time, but in different degrees of severity.

Although eye doctors commonly diagnose blepharitis, it can be difficult to find permanent relief of the symptoms that can include burning, flaking, crusting, tearing, irritation, itching, redness in eyelid margins and a foreign body sensation.

A complete blepharitis cure may not exist. But good eyelid hygiene and prescription medicine are often effective in managing blepharitis, while warm compresses and lid massages can help unclog obstructed meibomian glands.

Cataracts, which are cloudy lenses in the eye, are the most common cause of reversible blindness in the world today. In the early stages, blurred vision caused by cataracts may sometimes be treated by glasses. However, when the cataract becomes severe, only surgery can restore vision. 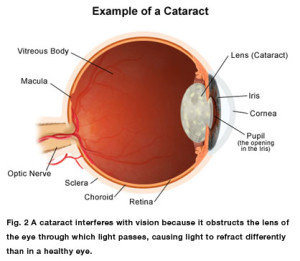 A cataract is a clouding of the eye’s natural lens, which lies behind the iris and the pupil.

Types of cataracts include:

Ready to see more clearly and say “Goodbye” to cataracts? Request an appointment to learn more.

Chalazion is a benign, painless bump or nodule inside the upper or lower eyelid. Chalazia (plural for chalazion) result from healed internal styes that no longer are infectious. These cyst-like nodules form around an oil gland (meibomian) within the eyelid, resulting in red, swollen eyelids.

The contents of a chalazion include pus and blocked fatty secretions (lipids) that normally help lubricate the eye but can no longer drain out.

A chalazion results when pus and fatty secretions are blocked and cannot drain. Many chalazia drain, resolving on their own, especially if you facilitate the process with periodic warm compresses and gentle massage of the eyelid.

However, some chalazia persist for more than several weeks and grow large enough to become cosmetically unappealing.

A larger chalazion may press on the cornea, temporarily creating irregularity on the eye surface and inducing astigmatism. This can cause blurry vision.

For more information, AllAboutVision.Com has a very informative article on chalazions.

Conjunctivitis, also called “pink eye,” is a common, highly contagious eye infection that often is spread among children in day care centers, classrooms and similar environments. Teachers and day care workers also are at increased risk of pink eye when they work in close quarters with young children.

Diabetes damages the small blood vessels throughout the body, including those within the retina, causing them to leak blood, resulting in swelling and vision loss. This is called Diabetic Retinopathy. Treatment may consist of the use of a thermal laser, sometimes in combination with injection of medicine into the eye. 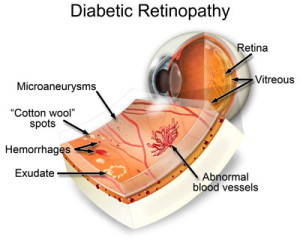 In its advanced stages, diabetes may lead to new blood vessel growth over the retina. The new blood vessels can break and cause scar tissue to develop, which can pull the retina away from the back of the eye. This is known as retinal detachment, and it can lead to blindness if untreated. In addition, abnormal blood vessels can grow on the iris, which can lead to glaucoma. People with diabetes are 25 times more likely to lose vision than those who are not diabetic, according to the American Academy of Ophthalmology.

Worried your diabetes may be damaging your vision? Request an appointment with one of our skilled doctors for a diagnosis.

Dry eye syndrome is caused by a chronic lack of sufficient lubrication and moisture on the surface of the eye.

Its consequences range from subtle but constant irritation to inflammation of the anterior (front) tissues of the eye.

Dry eyes also are described by the medical term, keratitis sicca, which generally means decreased quality or quantity of tears. Keratoconjunctivitis sicca refers to eye dryness affecting both the cornea and the conjunctiva.

Dry eyes can become red and irritated, causing a feeling of scratchiness.
But sometimes your eye doctor may want to measure the amount of tears in your eyes. A thin strip of filter paper placed under the lower eyelid, called a Schirmer test, is one way to measure tear production.

Another symptom of dry eyes is a “foreign body sensation,” which is a feeling that something is in your eye.

And it may seem odd, but dry eye syndrome also can cause watery eyes. This is because dryness on the eye’s surface sometimes will overstimulate production of the watery component of your tears as a protective mechanism.

Glaucoma, a disease of the optic nerve of the eye, is one of the leading causes of blindness in the U.S., especially in the older population. This is largely due to the fact that most individuals with glaucoma experience no noticeable symptoms. However, loss of sight from glaucoma can be prevented if detected early enough and treated appropriately.

There are two different types of glaucoma. The first, Chronic Open-Angle Glaucoma, is the most common type and is a result of aging. This type of glaucoma is caused when the angle, the part of the eye where intraocular fluid gradually drains out into the blood stream, is open yet the pressure in the eye is elevated and causing nerve damage.

Concerned about glaucoma? Request an appointment for screening as part of a routine eye exam.

A Retinal Detachment is a serious and sight-threatening event, occurring when the retina becomes separated from its underlying supportive tissue. The retina cannot function when these layers are detached. And unless the retina is reattached soon, permanent vision loss may result.

If you suddenly notice spots, floaters and flashes of light, you may be experiencing the warning signs of a detached retina. Your vision might become blurry, or you might have poor vision. Another sign is seeing a shadow or a curtain descending from the top of the eye or across from the side.

These signs can occur gradually as the retina pulls away from the supportive tissue, or they may occur suddenly if the retina detaches immediately.

About one in seven people with sudden onset of flashes and floaters will have a retinal tear or detachment, according to a study reported in late 2009 in the Journal of the American Medical Association. Up to 50 percent of people who experience a retinal tear will have a subsequent detachment.

No pain is associated with retinal detachment. If you experience any of the signs, consult your eye doctor right away. Immediate treatment increases your odds of regaining lost vision.